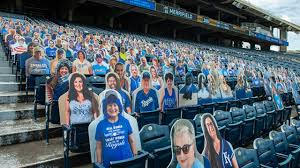 As a baseball fan, this year has been hard. First, there was the delay of the start of the season. Second, once it began, there were no crowds in the stands, which means less energy at a game and no way to go see a game. Third, earlier this year I had received a free pass to home games ... of course, it would be this year.

I don't mind the rule changes for extra innings, double headers, National League designated hitters, and so on. I don't mind the fake crowd noise (it actually helps!), the CGI audience, or the cardboard cutout fans (CCF).

But baseball without fans is just not the same. Not being able to go to a game (free or not) takes away a lot of what baseball is for me.

This year of baseball also helps show what church cannot afford to become ... the "players" doing their thing while the CCFs watch silently with unchanging expressions and no real depth.

I'm not thinking of anyone in particular, and I'm certainly not talking about those who can join us only through Zoom at this time. The only thing that sparked this thought was watching baseball and thinking about a danger that has always been with the church for 2000 years - Cardboard Cutout Christians (CCC).

They are present. They are facing forward. They are fans of Jesus. They are wearing the colors of the right team. And they always seem to have a smile on their faces. But they have little depth in Christ. They are not animated by the mission of the Church. The only real sound is coming from the players on the field or whatever artificial sounds are piped in because of their silence.

And although I'm not criticizing anyone in our church family, the reality of remote church poses an additional temptation to become a CCC. It's always a danger - I could sit in the front row every Sunday but still be a CCC. But behind a screen, virtualized, with Netflix just a click away, it's even easier to slowly, imperceptibly slide into becoming a CCC.

So, we must be intentional. We must be animated. We must be 3-D (instead of 3-C ... see what I did there?). And we have everything we need to keep engaged.

His divine power has bestowed on us all things that are necessary for life and godliness, through the knowledge of the one who called us by his own glory and excellence of character. -- 2 Peter 1:3

I'm grateful for the technology we're using, and they are tools that can be used to help each other grow as disciples. Every tool can be misused, too. Let us refuse to use this tool to build CCC's.