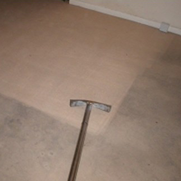 Last Saturday, I was helping out with Bridge of Hope's Megaday. Each year, Megaday is a little different, but this year included working on their building and landscaping, doing some cleanup at a nearby low-income apartment complex, fix-ups at both of the transition houses, and getting the word out in the neighborhood for the Day Camps coming up over the summer for kids.

I worked on the landscaping and at the apartment complex. The apartments are owned by folks who put very little money into the place. The manager is trying to do what she can. The residents ranged from strung out to praising the Lord from a motorized scooter.

When we started cleaning the carpet in the common room (which clearly had not been even spot cleaned in years), the manager came over and ran the carpet cleaner. Obviously, she wanted the place to be cleaner, and she was willing to watch her three-year-old and run the cleaner at the same time.

But without people to start the process and get the cleaner all set up, she didn't put in that same work. I don't say that to criticize - I admire what she's trying to do. But she did what a lot of us do. We procrastinate until someone else starts helping, then we jump right in.

We see the same thing often during Challenge when the youth have a service project. Those who have lived around the need for a while have done little until some people show up and start working, and then they lend a hand on something they could easily have been doing all along. Like I said, I do the same thing.

More than just helping out and getting needed tasks completed, rolling up our sleeves and giving time to a project to benefit others can spark people to jump in, even if it's something they easily could have been doing all along.

It's leading by helping. You lead others to good works of their own by taking the initiative, being present, and inviting others to join you.

As a result, I had a good little conversation with the manager about a few things, and now she knows that Bridge of Hope (and friends) loves her neighborhood.